Belle is a beautiful period piece with a message and emotion. I might add that it is directed by a woman, Amma Asante, which I think attributes to why it’s so good. The opening scenes are beautiful and can stand alone as photographs (a quality I always love and look for in movies). Based on a true story, it chronicles an African-American woman’s journey from childhood to adulthood as she is taken in by an aristocratic family in England. It is not that they take her in out of pity, but rather because they are related by blood. Her father, a Royal Navy Captain and the nephew of the family who takes her in, had an affair with a woman during his travels who dies and leaves the child uncared for. Landing in good fortune and good care, she navigates her way between the wait staff and her new family, constantly trying to prove herself and deem herself worthy enough to properly belong. So not only is it a movie about social injustice and the the struggle against slavery, it is a movie about female empowerment and advancement. This is especially emphasized when the family has a portrait made of Belle and her white sister, Elizabeth, in which Belle is depicted as equal to, if not more powerful than, her sister.

The film is also about the human heart and the various suitors that are after both Belle and Elizabeth. Interestingly, when it is time for the two of them to come out as ladies in society, Elizabeth is encouraged to do so, while Belle is not because of her skin color. This drives them apart, whereas they were previously close friends and sisters. Elizabeth would be the obvious ‘preferred’ of the two because of her delicate beauty, however she is not because of her financial standing, or lack thereof. Belle, on the other hand, not encouraged to have suitors because of her ‘lesser value’ has a huge inheritance from her father who passed away at sea, which makes her desirable despite the color of her skin. She has one suitor whom she originally takes a liking to, but later realizes that he is not the one for her because his family does not respect her, as becomes evident when his brother, previously interested in Elizabeth but casts her aside when he realizes that she doesn’t have any money, assaults Belle and holds his brother in poor regard for his interest in her. All along, Belle has actually been in love with John Davinier, an aspiring lawyer who fights for the oppressed, slaves in this case. Despite resistance from her family who oppose their relationship because of his low standing, financially and professionally, they finally come around and even take his side in regard to his social and political ideals. 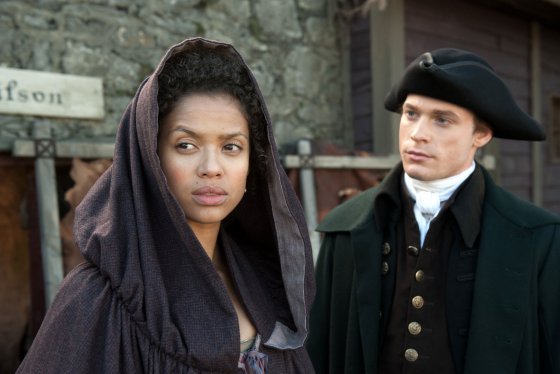 A beautifully done, captivating film that I think definitely merits a viewing. It will keep you intellectually engaged, emotionally hopeful, and visually awed.